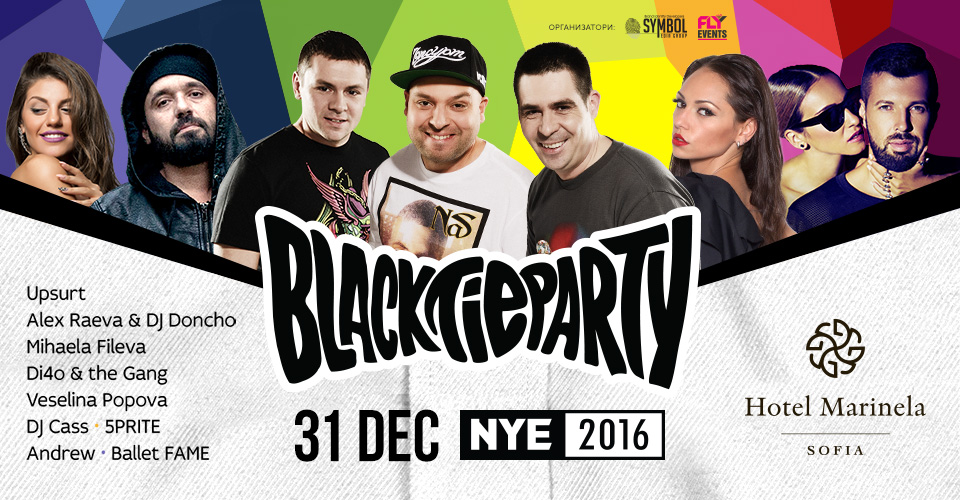 For a 7th year in a row we are proud to be the people responsible for a party that is talked about at least until March. This year was not an exception and the promises that it will be louder, larger and more memorable than before were kept or at least according to the comments we received on Facebook afterwards.

The entire organization around the party as always began several months before, and for a long time we talked about many names from the music scene and thought of a name for the party. Results were clear and we were ready to announced The Black Tie Multiroom Party, which only we can do. Each room had its own individual character and musical style – Upsurt, Di4o & The Band, DJ Doncho & Alex Raeva, Michaela Fileva, DJ Cass, Adnrew, 5prite, Vesi Popova were some of the names that went on the stage in the different rooms.

This year, besides the traditional massive Facebook campaign typical for of any event, we promoted the event through radio channels. Like every year we made a landing page , which was the main medium for the targeted audience. But what never had been done were Teaser 1 and  Teaser 2  . The two web videos promoting the event became the most viewed ones with a similar focus in November and December. We were extremely happy to read web comments like ,, Oh, finally someone to do something like that in Bulgaria “and ,,I had not seen such a cool video for a party! We will be there!”. These two videos proved to be the kings of promotion for us this year!

And after this long analysis of what and how well we have done it is good to say that everything went smooth and as planned. To thank our sponsors from Tonino Lamborghini, FlyHigh Club, Tripsy, wSwipe, Bubbles, The Irishman, Minkov Borthers, Stolichnaya Vodka, our media partners- Radio N-Joy, BTV Radio, Vbox7 and Pateshestvenik.com, all involved in organization, all the artists, dancers, hostesses and especially to you, our customers, who once again chose our party! We hope that we have fulfilled the expectations of all!