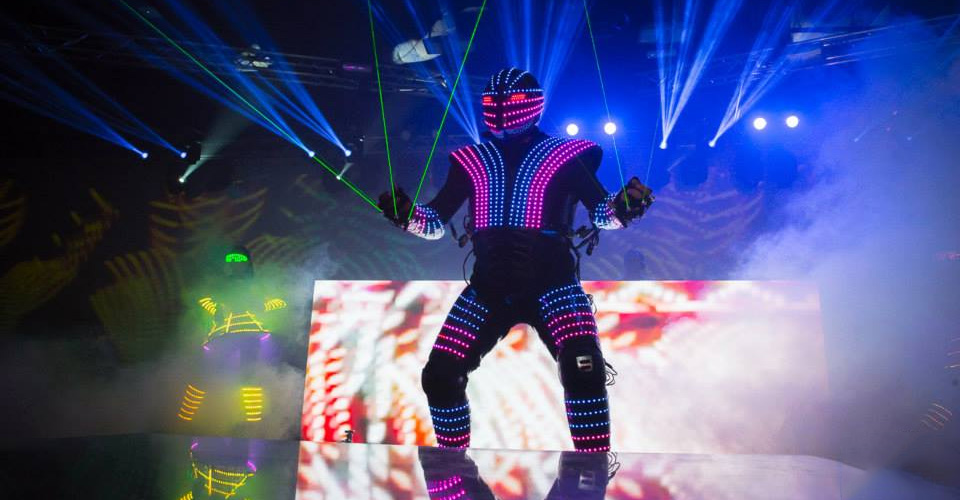 A spectacular light show, super hits, mastery and class behind the DJ panel and a lot of party mood accompanied by a dancing crowd made this year’s International Women’s Day a bit more special for more than 800 people that became part of the unique “Glow in the dark” party in Sofia Event Center. The guest star of the event held by Fly Events and Symbol Media Group was Tom Novy – the worldwide known DJ and also a long-standing resident of club Space, Ibiza, who with an easy brought the rhythm of the legendary party destination to Sofia.

A team of professional makeup artists helped our guests to get in tune with the concept of the evening painting their bodies and faces in order to “glow in the dark” under the neon lights. The charming boys from Tuborg also helped with the atmosphere with shining non-permanent tattooing as well as the beautiful Smirnoff girls cheering up everyone with a welcome drink.

Amid hundreds of glowing accessories and an audience that was even more luminous the native talent DJ Diass kicked off with an amazing set giving a powerful start to the party. He was followed by an uprising mood-booster from the best night clubs in Zurich- DJ Alex Mallios, after whom the king of the party- Tom Novy took the stage greeting the crowd in Bulgarian.

His stunning set featuring some of today’s biggest club hits as well as remixes of old classics was accompanied by a futuristic light show. The dancers wearing glowing suits warmed up the crowd for the appearance of the unique robot Andromeda whose arsenal of visual effects, high-tech LED lights and cyber vision carried the crowd several decades into the future.

Tom Novy did impress not only with his irrefutable mastery behind the DJ panel but also with his down-to-earth and extremely friendly attitude. A person from the audience presented him with a martenitsa (traditional Bulgarian adornment that people in the region carry with them until the spring comes for fertility and good fortune). Tom Novy not only thanked but after that he boasted with the new acquisition. Not to mention that during the party the DJ abruptly closed the distance and invited everyone wishing to join him behind the panel. The party continued until morning and people liked it so much that some of them stayed long after the sun had risen, enjoying the music and the atmosphere.